Having a Book Event in New York is great fun! If I would have known writing a book could be so much fun I still would have waited – it is a lot of work to get there. As my neighbor Marshall Besikof says, “It took them twenty years to be an over night success.”

The night of the party was just a couple of days before my birthday. Marcy Syms decided to surprise me with a huge cake with the cover of the book on it. I took the candle out as not to promote N1H1. Standing with us was Ken Clark CEO of 1-800-Translate, and Regina Lombardi Senior VP with Brown Brothers Harriman & Co.

Marcy Syms, of Syms Clothing Store and now Filene’s Basement (you may know Filene’s because they have the annual Running of the Brides much like Spain’s running of the bulls, but way more classy) threw a great event last night at the 21 Club. It was such an honor to be having a celebration of the second printing of Just Ask Leadership (McGraw Hill 2009) after only two months. Just yesterday I 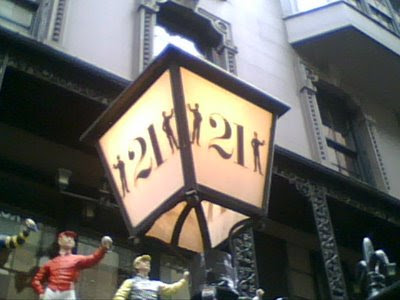 was officially informed by Mary Glenn at the New York Celebration that we are going to have the second printing.

What is so satisfying about this is that when I asked if this was expected her response, very straight forward and honest as always was, ‘It is always hoped for when we choose a book and an author to work with that we will have this success and you should feel very good because not all authors get there.’

This was a great celebration and totally fun! It was good to see old friends, and meet new ones. Tereasa McBride is CEO of Avant Films and founder of College Bound (Prior founded McBride and Associates, Inc., in 1986), Marcy, Myself and Tom Gottleib CEO of Two’s Company.

There were so many people at the event to celebrate and spread the word of Just Ask Leadership!